The holiday season is fully here, and with only one week left of White Christmas, our blog just wouldn’t be complete without Bob Wallace. Many of you probably know him better as Shad Olsen. Shad returns once more to Duluth (his hometown) after this past summer’s Les Miserables directed by Dorothy Danner at the DECC.

We’re thrilled to have Shad back, and this time on the real Playhouse stage! We took a few moments to get to know him and to learn a bit more about his White Christmas experience. 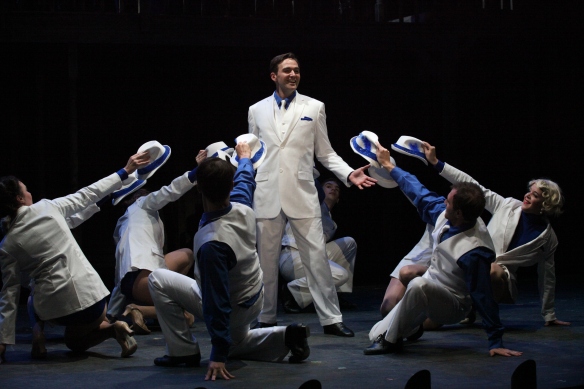 DPH: Thanks for taking a few minutes to talk with us, Shad. It’s great to have you back in Duluth! Let’s get down to it. What’s it like to be working with a director like Michael Ferrell?
Shad Olsen: I can’t say enough about Michael Ferrell. That man is a bright light, an inspiration, a creative genius, a nurturer, and he pushes us all to do our best work. There were definitely days in rehearsal where I thought I was going to die because the choreography was so hard on me, but Mr. Michael knew exactly how hard he could push. I found myself capable of much more than I had expected.

He also blocks absolutely fascinating scenes. When my character (Bob Wallace) and Betty share their first kiss, Mr. Michael put distance between us in such interesting ways that the audience can’t really tell who is pursuing whom and who might make the first move. It feels electric every night.

DPH: We absolutely love that scene (and no, we’re not just saying that!). What is it like sharing the stage with your fellow Hermantown alum Kyle?

Shad Olsen: Kyle and I rode the same school bus when we were kids, but we didn’t know each other well. I’m four years older than him and when you’re young, that’s a lot.

Getting to know him through White Christmas has been an awesome experience! I adore and respect that boy so much and I’ve found that he’s a very clever actor, a unique talent, and a great friend. Our banter in real life has taken on some aspects of our characters so it’s very natural for us to go from our dressing room to the stage and carry on our friendship there. He makes me laugh every day.

Duluth Playhouse: What inspired you to portray your character the way you did? Where do you find the influence/inspiration for characters, especially a character as recognizable as Bob Wallace?
SO: In a show like this where a beloved performer has created the role originally, I want to give the audience a flavor of Bing Crosby without doing a bad impression. So I lower my voice and give it more breath to capture a bit of Bing’s smooth vocal quality. Once I’ve done that, my body feels more grounded and my energy changes and becomes more controlled.

I hope I can take some of the strengths of this character into my real life just like I learned a thing or two from Grantaire when I played him in Les Miserables with the Playhouse last summer.

DPH: What’s the funniest thing that’s ever happened to you on stage?
SO: I did a national tour of The Three Musketeers playing a very foppish Louis XIII, king of France. I got terribly sick and had no understudy. So I could be seen in the wings in high-heeled shoes and a powdered face, crouching over a bucket, holding my lace down with one hand and my long wig with the other, throwing up until there was nothing left in me. Then I would have to take a deep breath, paste on a smile, and go back on stage for my next scene. It wasn’t funny at the time, but in retrospect…

DPH: Yikes! We’re keeping our fingers crossed the rest of this show will see you healthy and not in the wings with a bucket! Alright, just one final question for you. What piece of advice would you have for aspiring actors and actresses?
SO: Audition! You definitely won’t get cast if you don’t show up and you won’t be any good at auditions unless you do it all the time. I should know. I hate auditioning with a passion. I don’t feel comfortable competing for a role and can only do my best work when I have ownership of the character. But you can’t own the character until you’ve submitted yourself for it.

In New York, I very rarely audition and as a result, my career has been pretty slow. Most of the shows I get are through directors who know what I can do and offer me projects. But at one time, I had to audition for those directors. I need to audition much more. And so do you.

THEN: Shad (with Ali Littrell Finstrom as Fantine) in ‘Les Miserables’ from the 2013-14 season as Grantaire.

NOW: Ali and Shad as one of our leading pairs in the holiday show, ‘White Christmas’ as Betty Haynes and Bob Wallace.

Still searching for a way to see White Christmas?
We hate to keeping bearing bad news, but White Christmas is still sold out for the rest of the run. BUT there is one thing you can still do: RUSH THE SHOW!

Rush lists begin one-hour before each performance (6:30pm for evening performances, 1:00pm for matinees). You must be present to put your name on the list. Season ticket holders on the Rush List will have first priority if tickets open up. Any last minute no-shows or cancellations leave empty seats we can fill! You must also be present to claim tickets at the start of each night’s show.

Now, you’re probably asking, what are my chances of getting tickets even if I rush? Around 5-10 people from the Rush List have been able to see the show each night thus far. While we can’t guarantee seats will open up, or if they do, where those seats might be, we definitely recommend rushing if you are set on seeing this holiday classic. Like our friend Shad said, you won’t get tickets if you don’t at least try!